PEI arranged Medical Supplies valued at Rs. 170 Million that were donated to FATA and KPJ governments. Two 40 ft containers full of medicines and supplies emergency relief items were handed over in Peshawar to FATA and PDMA and another container to the Mr. Zahir Ali Shah, KPk Minister Health at Swat in Aug. Relief items worth Pak Rs. 170 million include medicines and medical & surgical supplies. The relief items will be dispatched to various hospital of KPk and FATA.

PEI responded in-time to the shelter needs of worst flood hit areas of districts Nowshera and Charsadda, KPK. The government of KPK (through appropriate department) assigned area to PEI that was leveled for establishing small tent villages.

Tents fixed and individually distributed in district in Nowshera 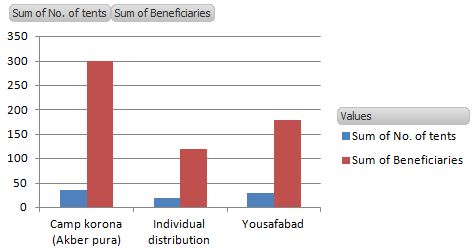 Tents fixed and individually distributed in district in Nowshera

We collected data, visited the fields, and observed the areas. We then analyzed the data and selected areas to receive assistance. Community leaders and volunteers were also involved in making lists of IDPs and selecting the beneficiaries in implementing the actual distribution. The community leaders and volunteers did not contribute funds or anything else, except for their help in distribution of food.

The governor KPk Mr. Owais Ahmed Ghani, who PEI officials at the Governor House on Monday August 30th 2010, appreciated the efforts made by PEI.

Apart from these major activities, PEI installing water hand pumps at districts Nowshera and Charsaada and has also taken over two BHUs in Swat and will provide mother and child health services to the area. PEI expects more relief items to arrive in the coming days and The HOPE-international has made a commitment to provide consignments worth Rs.750 million in 2010 for flood victims of Pakistan which will benefit many needy people.